In times when the vehicle is left stationary for a long time, the battery can be discharged and even seriously damaged. To avoid this, there are car battery chargers. You only need a plug and your battery will recover charge as if it were a mobile.

The problem with these devices is that there are many models and not all of them are suitable for every situation. You have to know how to choose knowingly and taking into account what is really needed. Therefore, here we bring you a list of the best car battery chargers, in which we talk about two very different types. 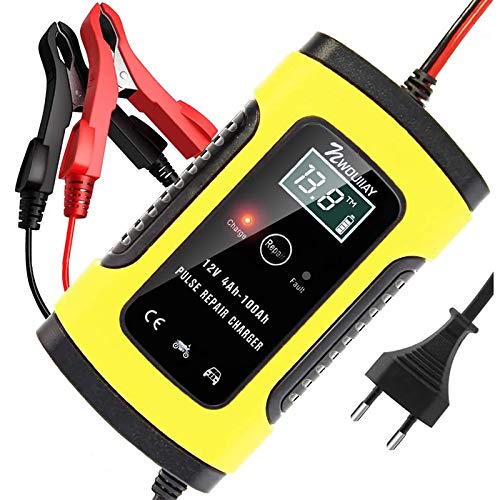 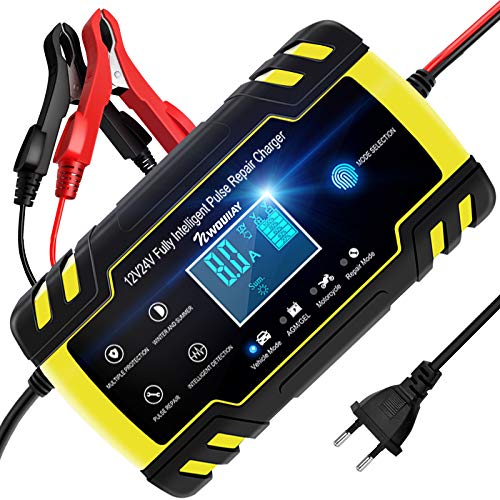 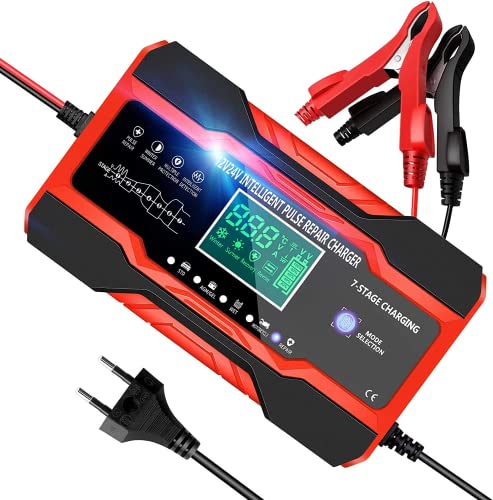 The supply of this type of product has grown considerably in recent years. Moreover, competition has caused them to include a Lots of features and improvements, which puts them at the level of many professional battery chargers. And what is more important: the ease of handling it has also increased to such an extent that anyone can use it. You should only follow the usual recommendations to have when touching a car battery. 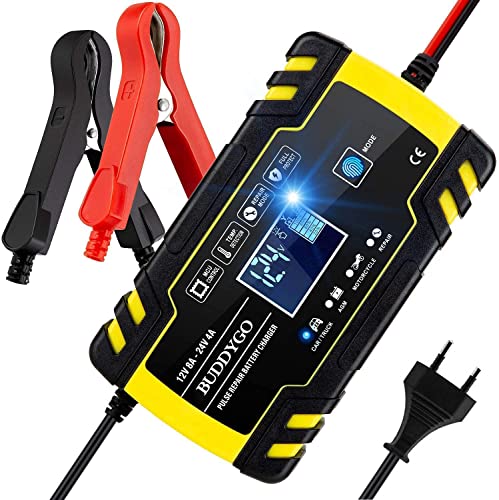 We start with the most affordable model, but not for that a bad battery charger. Quite the contrary. It is a simple device to use, with a maximum current intensity of 6 amps. In addition to including all security measures necessary to use it safely.

The Pulse Repair Charger Buddygo is a smart battery charger that includes the repair function. With it you can try to recover a little the health of 12v batteries, that have deteriorated due to long periods of inactivity with the car or other causes. Precisely because it is intelligent, also serves as battery maintainer. What is very useful if we know that we are not going to use the car for a long time.

The next option we bring you is from NWouiiay. A march that we already mentioned in the car starters. It is a model very similar to the previous one, but with some extra quality that can be very useful depending on your circumstance. Also has 8 amps of maximum current intensity, which means that it is able to charge the battery faster.

Unlike the previous one, this car battery charger is compatible with 12V and 24V batteries. In other words, it will not only be able to perform its function with cars, but it can also be used in other heavier vehicles. Of course, never get confused when selecting the voltage. 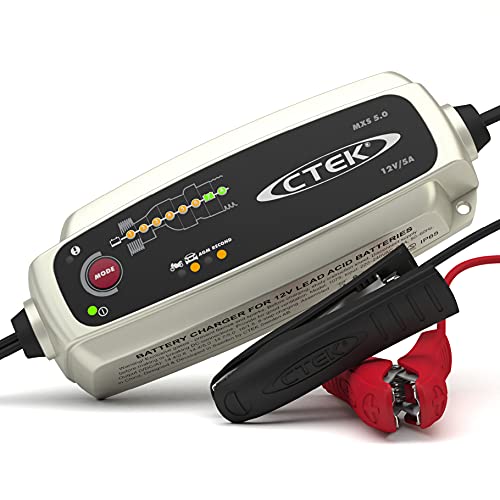 With this model we already entered the battery chargers with some other advanced function. The CTEK MXS 5.0 is very similar to the previous ones because it also has a function of battery repair and serves as maintainer. Although it is true that it has a little less current intensity, with its 5 amps. As an advantage, it includes the possibility of mount on the wall and to connect to the mobile through the battery sense app. Perhaps that is why it does not have an LCD screen to indicate the state of charge or battery maintenance.

An interesting addition to this model is that its cables have a intermediate connector which improves your safety and comfort when using it. You can go with the cables by themselves, to place the clamps on the 12v battery from the car, and then simply plug the charger into the end. 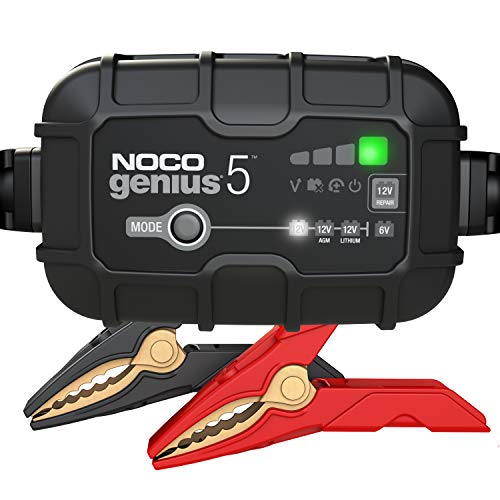 This charger is recommended for batteries that are somewhat more special than the typical ones. yese can also be used with marine or caravan batteries, that is batteries of deep cycle. That they are nothing more than batteries designed to supply current in a sustained way to power the lights or low-power appliances of this type of vehicle.

It also includes battery desulfation and repair functions. It is compatible with normal lead-acid, gel, AGM, lithium-ion batteries and those intended for start-stop cars. 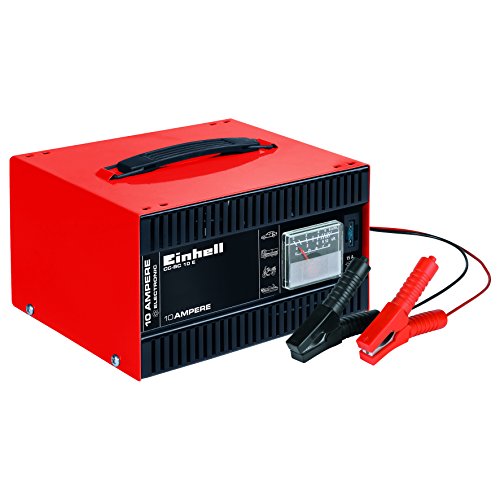 Finally, let's talk about a old fashioned car battery charger. It is just another device. voluminous with steel casing, of which can be seen in some workshops. It does not have automatic functions, such as battery repair or maintenance, but in return it has more maximum current intensity than the other three: 10 amps.

Precisely for this reason it is a more suitable charger if what you want is to have the 12 V car battery ready sooner. Since its higher amperage allows it to fulfill its mission faster. Furthermore, despite its somewhat rudimentary appearance, it also has security protections against overload, reverse polarity and short circuits. To which must be added that, having electronics charging, he only adjusts the necessary intensity.

Are cheap car battery chargers worth it?

The truth is that competition between brands has caused a drop in the prices of car battery chargers. That is why it is easy to find cheap models without their capabilities suffering. So much so, that it is no longer worth buying second-hand car battery chargers. Unless, of course, your budget is tight, you find a reputable seller and the price is very low.

If you want a cheap car battery charger and make the right purchase, you just have to know a few details and take a look at its specifications. This way you will not have problems to differentiate between the grain of the straw, within the enormous offer that there is today. Here we tell you what you should not give up even if your model is low cost:

One of the most important factors in a car charger is that it has a certain maximum current intensity. 5 amps or more It is a good reference to take into account so as not to make a mistake. Otherwise, the charge would be too slow and it could start to be considered just a battery maintainer. As much as the manufacturer says otherwise on the box.

You will see that among the models that we have analyzed, it is possible to differentiate between smart chargers and those of a lifetime. Us we recommend the smart ones because they usually have special functions such as battery repair. A very interesting automatism of type of devices, which are usually bought when the vehicle is not used much.

Currently, we only recommend the simpler chargers if they have any advantages that you can't find on cheap smart chargers. For example, the Einhell CC-BC 10 that we have told you about, is cheap and at the same time has an intensity of 10 Amps, which places it above the other three. So it is a good option for those who want loading speed.

Another of the usual functions in smart chargers is that they can also act as maintainers. That is, they can be left connected so that Battery it stays always in good condition. They are able to stop and re-supply load only when necessary, because they continuously analyze their status.

This is especially useful if you pass long periods with the car stopped, in which the Alternator has no opportunity to charge the battery. This will discharge itself little by little until it deteriorates, since the lead-acid cells do not withstand the loss of charge well.

In this matter, it goes without saying that the more security measures you have, the better. However, if you find a model that does not stand out for this, but is the one you want for other virtues, the protections the ones you can't give up are: against the short circuits, against reverse polarity and against the overload.

You will see that some chargers also have low voltage protection, protection against overheating and protection surge protection. A measure that is also highly desirable. Of course, we recommend that the model you buy also includes them.

How do you use a car battery charger?

Using a battery charger is very simple. Take the usual care when handling 12V car batteries. After all, you are working with electricity. But the extra precautions that must be taken with these devices are very simple:

How do you know if a battery charger is working?

All the chargers that we show you in this list indicate if they are charging through a LCD screen, for an Light box or needle. If it does not work, it will be indicated in one of these systems. In which case the next thing you'd better do is unplug it and find a replacement.

It is also true that if the reason why it does not work is due to an intensity peak that has blown the fuse, you can replace it and try it again.

Car battery chargers have been improving over time, until they became instruments like the ones we have analyzed in this article. That is why, although models with older technology are still being sold, we recommend the smart ones. As we have told you before, only in cases where you need something more powerful, is it worth sacrificing the new features.

Among those that we have mentioned in this list, we are left with the NWouiiay 8A. It has everything you would expect from a modern charger and a maximum current intensity of 8 Amps, which is a lot for its category. All this with a very contained price, which gives it a very high cost/quality ratio.