If your battery has run down after a long period of inactivity, one of the options available is to use a car starter. A device that not everyone knows, but that is capable of starting a motor, thanks to the great intensity of current that it generates. If your battery is still in good condition, then you can fully charge it when you ride for a while.

In their most recent versions and suitable for a particular use, the starters are very similar to typical Powerbank. They even have similar energy storage capabilities. However, although they can also charge electronic devices via USB, their main function is to start a car with a discharged battery or in very cold weather conditions.

There are many people who have left their car without using it for a long time and have been left with the battery out of action. For this reason, at Actualidad Motor we have decided to bring you this list of top 5 car jump starters of 2021. You'll find that they all have the safety qualities needed to start 12V battery engines and a long list of satisfied customers. 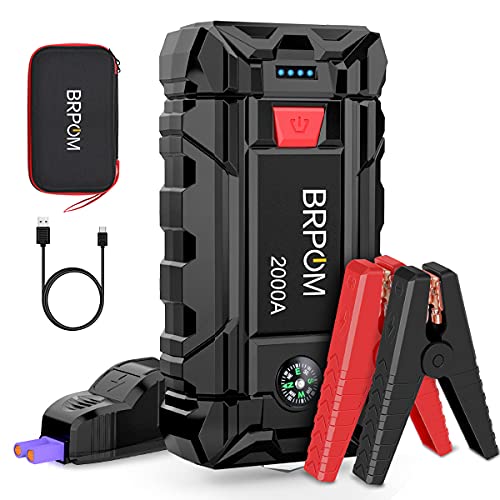 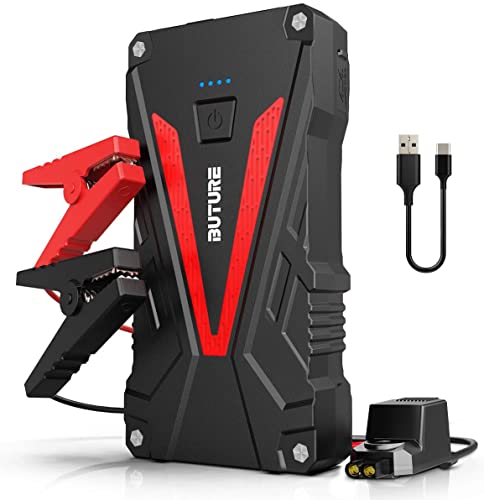 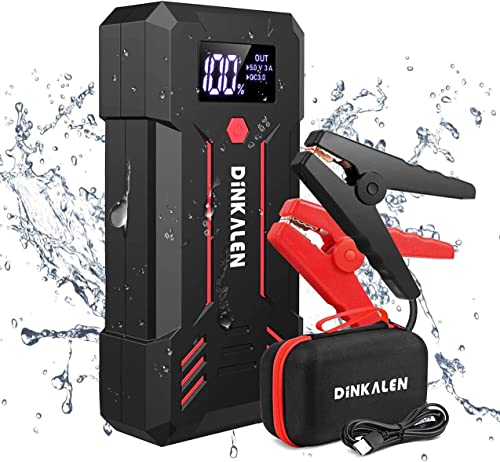 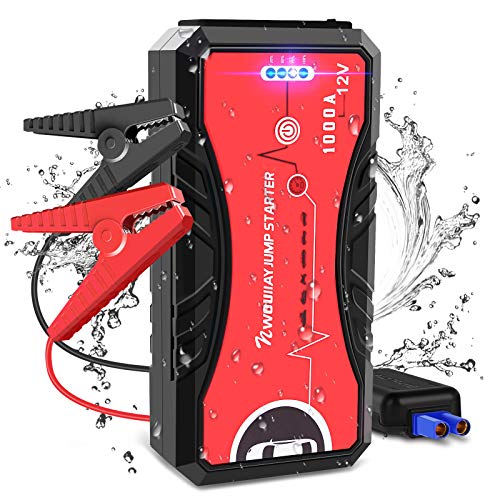 The second starter that we mentioned to you is a model something more powerful, But with less capacity on your battery. Therefore, perhaps it is a little worse as Powerbank charging electronics, but slightly more capable as a jump starter (slightly larger engines). After all, the latter is what it is about in this type of device. The maximum intensity of its electric current is A 1.000 and its battery stores up to 13,2 Ah.

Despite its lesser capacity as an energy storer, it does have a Type C connection, in addition to the two USB connectors (one of them 3.0) usual in current starters. It also has Lantern, but it does not have a compass or an LCD screen. The latter is replaced by four lights, indicating charge level in intervals of 25, 50, 75 and 100%. 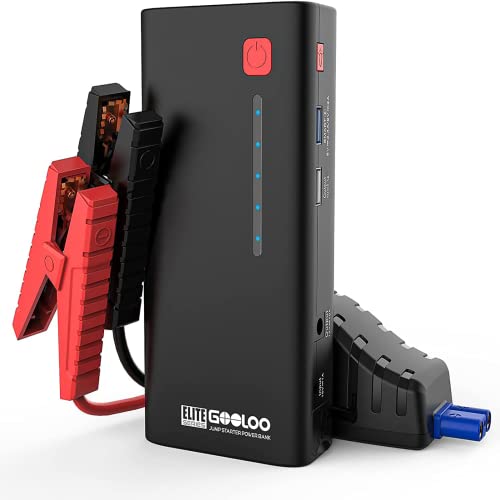 Here we bring you one more efficient and modern version. This is a starter A 1.200 of current intensity. That is to say, 400 more than his brother. You have a battery with much less capacity: 18Ah, with which on the other hand you have no problem charging multiple devices. For them it has two USB connections, plus another Type C. 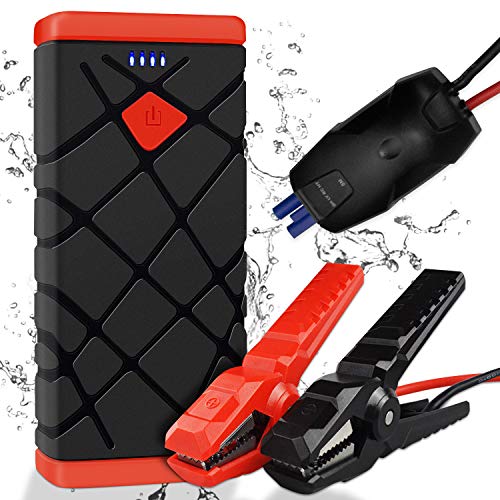 We are already approaching the end of this top 5, with one of the most powerful and capable starters on the market. This Joykee brand model delivers an intensity of up to A 1.500, with which you can start many types of 12 V battery vehicles. It is capable of storing a maximum of 16 Ah, with which you can charge various electronic devices.

In terms of its functionalities, it also has Lantern (in his case with two LED lights) and USB connections to charge devices. Also has all the necessary protections to make it easy and safe to use, with protection against short circuit, over current, over charge, over voltage, overload, over temperature, etc. 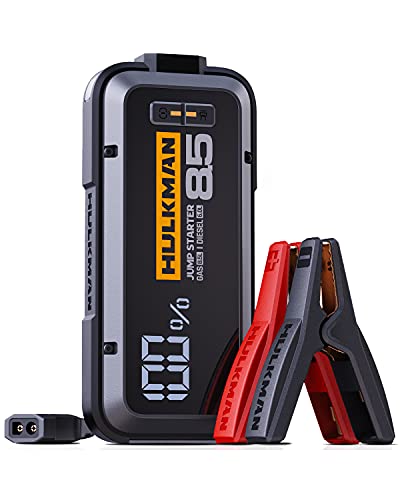 And finally we come to the end of this list of starters with the most complete and capable model of the five. This is a starter that not only has A 2.000 of current intensity and 20 Ah of capacity, but it has several extra functionalities.

With such intensity, it is a starter that few vehicles and situations can resist. The motor in question must be very large and heavy so that it cannot be started with 2.000 Amps. Hence, its manufacturer indicates that it can with displacement up to 8.5 liters in gasoline engines and 6.0 liters if they are diesel. That means that it could even with the enormous Bugatti Chiron W16 engine. Although probably only in weather conditions favorable.

However, to this we must add that as indicated by BuTure, also allows to charge the car battery through the 12 V socket from the car cigarette lighter. Besides that you can deliver voltages up to 15 V at 10 A through its DC output, which means a power of 150 W. 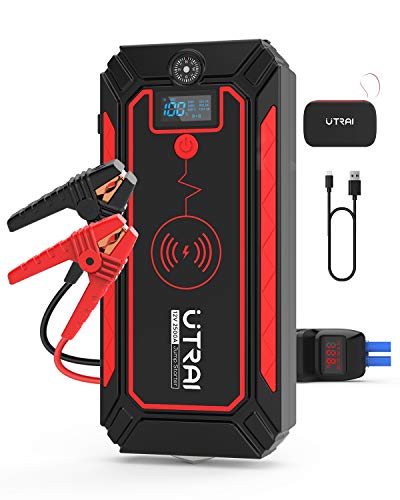 We finish with other of the most capable models that can fulfill their function with all current cars, thanks to their A 2500 of intensity. The capacity of your battery is 24 Ah, so it can be used as Powerbank for many devices, as well as as a starter.

In addition to these capabilities, it has all security measures desirable in a starter. They range from the typical protections against short circuit, excessive discharge, overload, overheating and overvoltage, to connection or reverse connection. It also has other interesting qualities like a smart chip with screen, compass for those who use it in camping and Lantern.

How to choose a good car jump starter

El first factor to consider When you go to buy a car jump starter, it is the current intensity that it is capable of delivering. Starting a small 1.0-liter gasoline engine is not the same as starting a huge 4.0-liter diesel. In the description of the product it is indicated up to what displacement can be started with each model.

Regardless of the brand you opt for, you better not skimp on this because it is normal for manufacturers to be very optimistic about what their starters can do. Especially if an engine is going to be started with the battery practically at zero and/or with a very low ambient temperature.

For those who will face very difficult situations, it is recommended that the car jump starter has a lot of intensity or at least one function Boost. Which means that it can send a discharge with a higher voltage peak, in cases where there is not enough energy with normal use of the device.

All the car jump starters that we recommend on this list have the highest security measures on the market, so you can rest easy in this section. However, if you are going to opt for others, remember that you must have at least: protection against overheating, overvoltage, overload and short circuits.

In addition, it is also very important that you have protections to avoid problems in the event of a accidental reverse connection (positive pole in the negative and vice versa) and reverse charge, which although it has a similar name, is a very different case: the passage of the current of the car battery towards the starter.

It also doesn't hurt to include some system to prevent full download of the starter. Especially with the use that is usually given outside a workshop. That is, a very sporadic use. Otherwise, the charge level will drop a lot between uses and the starter may deteriorate.

Car jump starters often come with multiple ports to charge different devices. So you can use your battery as if it were a Powerbank conventional. Normally you have two or more connections USB and some other of a different kind like the type C, which is becoming more and more common in electronic devices.

However, this is not only a matter of practicality. Having multiple ports to charge your phone, tablet, or even a laptop is good for keeping your jump starter in good shape. Any battery will deteriorate further if it is never used, that if used periodically. Therefore, the more compatible devices you have with the booster ports, the more you can use it.

You will see that the variety of cargo types that these devices can deliver is not the same in all. There are only those with fast mobile charging capacity, for example: 5V / 2.1A and 5V 2.4A / 9V 2A, and there are those that are capable of charging larger devices, with voltages of up to 19 and amperages of up to 10.

We recommend that you opt for a starter that has a lithium battery, because they hold up better for long periods without being used. Those that work with a lead acid battery deteriorate more by losing their charge over time, because they are designed more for a workshop or professional use, in which they will be continuously charging and discharging. In addition, the latter do not usually have functions of Powerbank.

As you may have seen in the starters that we mentioned, their batteries can have very different capacities. In this regard, you should mainly take into account three factors:

How to use the jump starter?

Using a car jump starter is very simple, but you must not forget that you are going to operate with electricity. Therefore, you must take into account the typical precautions when manipulate the car battery. In addition, being a device with a lot of power, it has some extra recommendations:

Once you know the general safety recommendations for using jump starters, you are ready to get down to business with your model. Although it is always better to look at the specific instructions for your model, the most common steps are as follows:

Note: in the event that you have not managed to start the car with the starter, you should know that some have función boost. In other words, they do not release all of their amps if used normally. If that's the case for your model, don't use that function on the first failed attempt. As mentioned before, wait for the starter to cool down a bit and try again in normal mode. If it fails again you can think about using more power.

In some starters the boost or high amperage function is activated simply by pressing a button. In others, however, it is activated by using a needle to press into a hole for a few seconds.

Opinions: what is the best car jump starter for us?

The best starter will always be the one that best suits your needs. To take two extreme examples: the owner of a Ford Mustang GT with its 5.0-liter engineIf you live in a very cold place, you will need a very powerful jump starter. On the other hand, the one who is only going to use it to light a small Hyundai i10 1.2MPI, and above in warm areas, a less capable and cheaper one will suffice.

Leaving aside these considerations that anyone should take into account when buying a starter, we give the first position to the TackLife T8. This model is the winner for its good relationship between quality and price, since despite being one of the cheapest, it has high power and capacity to spare.

What is the best car jump starter?

It will depend on your needs, which in this case will be based on the climatic conditions in your area and the characteristics of the car.

How is a car jump starter used?

You have to connect the clamps to the positive and negative poles of your car battery. With this, you will be able to start it normally.

What prices do battery starters have?

Between €50-100, although it will depend on what you need for your car model. Not all of them are as easy to start as others, but we will explain what to base them on here.

🎁 Until 50% off in car and motorcycle accessories 🎁