Many people think that a multimeter it is a complicated device that only an electrician can take advantage of. However, those who occasionally roll up their sleeves to do home or car repairsThey know that it is a very useful tool that can help us save a lot of money.

If you take a look at our tutorials on car mechanics, you will see that the words multimeter, multimeter or tester appear very frequently. For example, it is what will tell you if a speaker receives power or needs to be changed, if the heaters of your diesel engine work and even what is the reason why the lights do not come on, when it is not a simple burnt bulb.

Therefore, here we are going to explain what you should look for if you want to buy a multimeter. You will see that there is a wide range of models with very different capacities, which may go unnoticed by some, but which can be very helpful depending on your situation.

Comparison of the best multimeters 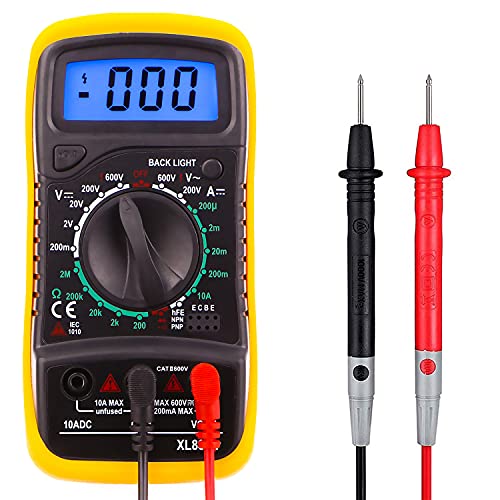 We start with a very affordable model but at the same time it has some very interesting qualities. So much so, that they place it above many multimeters in its price range. The first virtue to take into account is that, in addition to measuring voltage in Direct Current and Alternating Current, Amps in direct current, Resistance, diode y Continuity, also offers functions for capacitance, frequency, temperature, NPN, PNP y hFE.

All this makes it an exceptionally complete model for the little money it costs. This should be taken into account if many of these advanced features are to be used. In addition, not only does it include test leads, but it also comes with a practical support plate so that it stays in a lying position while we operate with it and some battery. 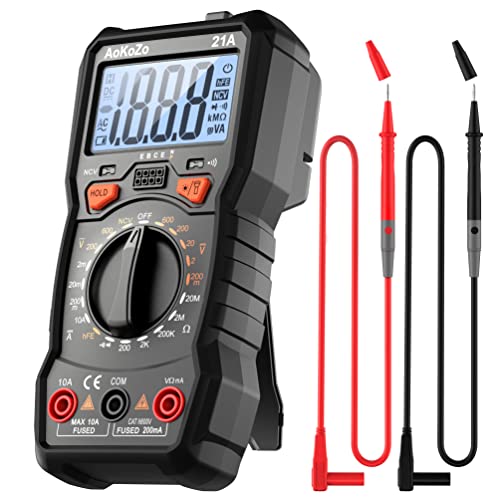 This second model continues to move within the low price range, but also has features typical of more expensive multimeters. The Aokozo 21A also has a good number of functions: voltage in Direct Current and Alternating Current, Amps in direct current, Resistance and Continuity, diode and transistor test. 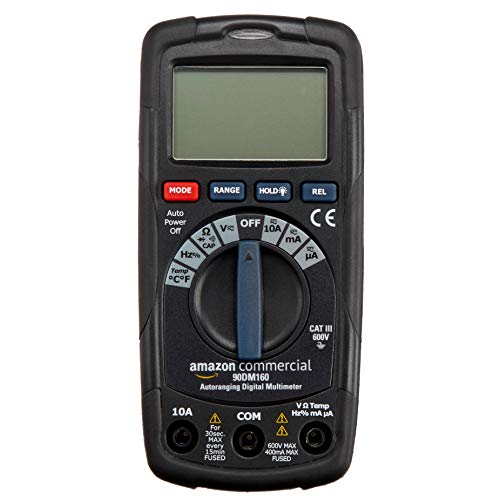 The third model that we bring you is a little more expensive, but thanks to that can measure voltage and amperage in direct and alternating current, temperature (type K), frequency, plus 13 measurement functions. It also has auto range, so you won't have to select it with any wheel, and it has data retention.

To this we must add that in addition to the typical test cables and the battery to be able to work, also includes a temperature probe. having 4000 accounts, has a bit more resolution in measurements than previous multimeters, and its LCD screen lights up to operate in dark places. 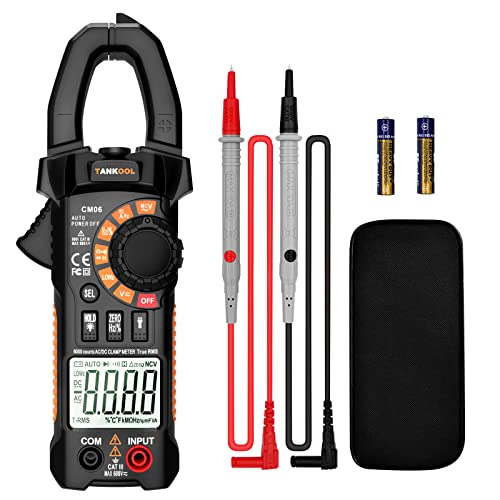 Note that the fourth model that we are going to talk about has a very interesting quality for some jobs on the car: the clamp meter. With it you can measure the amps without having to open the circuit to interpose the test leads of the multimeter. For example, it is useful if you want check for abnormal electrical consumption in the car, causing premature battery discharge.

In addition to this, it is a multimeter with some qualities far superior to the rest of this list. He is able to measure up to 600 A and 600 V, both in direct and alternating current (6.000 resolution accounts). Allows measurement of Resistance, Capacity, Frequency, LOWz, NCV Test and Duty Cycle. In addition to that it has a low voltage display, automatic power off and data retention.

How to choose a multimeter

You will see that in the specifications of serious multimeters, some somewhat cryptic values. These refer to factors such as its precision or its resolution, which are very different characteristics, and which largely determine the quality of the model in question. Here we tell you what they really mean and what you should look for.

This value is normally indicated with numbers such as 2.000, 4.000, 6.000 accounts… In principle, it indicates how fine the multimeter can measure in each of its ranges. For example, if we select 20 V and it has 2.000 counts of resolution, it means that it will be able to measure to two decimal places: 20,00 V. If we choose the 2 V range, it will be able to measure to three decimal places: 2,000 V.

In low and intermediate measurements, that a multimeter has more counts (for example 6.000), does not mean that it will offer more resolution. When it indicates a value this high, it is usually a sign that its measurement ranges work in larger steps. For example: having the option to choose 60V instead of 20V, and still keep the same decimal resolution. In this case up to 60,00 V. Again, if you choose the next smallest range, 6 V, you will be able to measure to three decimal places: 6,000 V.

Where you will notice the difference in resolution is at higher measurement ranges. If your multimeter has 2.000 counts, but measures up to 600V, it won't be able to get to the decimal point. But if it has 6.000 counts, it will be capable: 600,0 V. As you can imagine, it will only make sense to buy a multimeter with a higher resolution than the one in this example, if you are going to use it in a high range and need to fine-tune.

Although the name may seem the same as the resolution, this factor refers to the meter error rate. It is normally indicated with a percentage above or below the real value: 1,2%, 1,5%, 2%…

The aggregate (+2, +3, +5…) becomes much more relevant when measuring very small values. Imagine that what you are measuring is only 0,4 V and that number can go up or down two tenths. The percentage of error is much higher than in wider ranges.

The examples of precision that we show you in this section are common in mid-range testers. Although much higher accuracies can be found in the best professional multimeters. But of course, their prices can be multiplied by 10 or more. Just take a look at what a Fluke multimeter costs. Especially if it's high-end.

If you want the multimeter for typical basic auto or home repair jobs, it doesn't need to have many types of function. The usual ones that you will find are those of measuring in direct and alternating current voltage and amperageIn addition to Resistance, diode measurement and Continuity. Temperature measurement can also be interesting.

Other more advanced ones such as the measurement of transistors, frequency, The NCV tests or electrical capacity they are more typical of electrician and electronics jobs. That is why they are less frequent in the repairs that one usually does at home of your vehicle.

As we recommend in any product comparison, security must come first in any device. That is why it is important that the digital multimeter you buy complies with at least the following security measures:

How to use a multimeter for beginners

Using a multimeter is not complicated once you know what each of the measurements it can do. Even if it is a professional multimeter. The first differentiation that must be clear is that of the types of current:

From here, we already started talking about more advanced features, which require more technical knowledge. That is the case of diode test, electrical capacity measurement, transistor measurement, frequency measurement, NCV tests, infrared remote control detection, thermometer… If you want to know more about this matter, we recommend the following article: How to use a multimeter.

How to know if a multimeter is damaged

The multimeters have protections to prevent damage in case of error. For example, fuses that blow if certain levels not supported by the device are going to be exceeded. In these cases, the multimeter will indicate it on the screen or will remain off depending on the model. At which point the fuse must be replaced. Therefore, it is convenient to have spare fuses and even buy a model that brings them in the box.

In the event that the damage has been greater. Though let's change the fuse the digital multimeter display will not light up at all. The normal thing in these cases is that you have to buy a new one, although in the case of professionals (and more expensive) they can also be sent for repair.

How does a multimeter work?

Multimeters work thanks to a resistance when they measure current intensity (A) or voltage (V). In the event that Amps are measured, it is placed in series. That is, opening the circuit and adding the multimeter inside it (unless it has a clamp meter). In the event that Volts are measured, it is placed in parallel, that is, it is not necessary to interpose the multimeter inside the circuit, because it is enough to touch its test leads.

When the multimeter measures resistance (Ω), it uses a pila to circulate a current through the circuit and measures the return current with a potentiometer. That is why it should not be used in a live circuit, on capacitors, etc. Otherwise it could be damaged or at least the fuse that protects the multimeter would blow.

Final opinions: which multimeter is better?

In our opinion, since they are relatively cheap devices, it is not necessary to skimp too much on them. The model Meterk MK06 Digital Multimeter with clamp meter, it includes a large number of functions and safety measures, while maintaining reasonable ease of use. Therefore, it is our choice over the other models, which have good qualities, but are not worth so much just to save a few euros.